The Plight of African and Caribbean Nationals in Ukraine 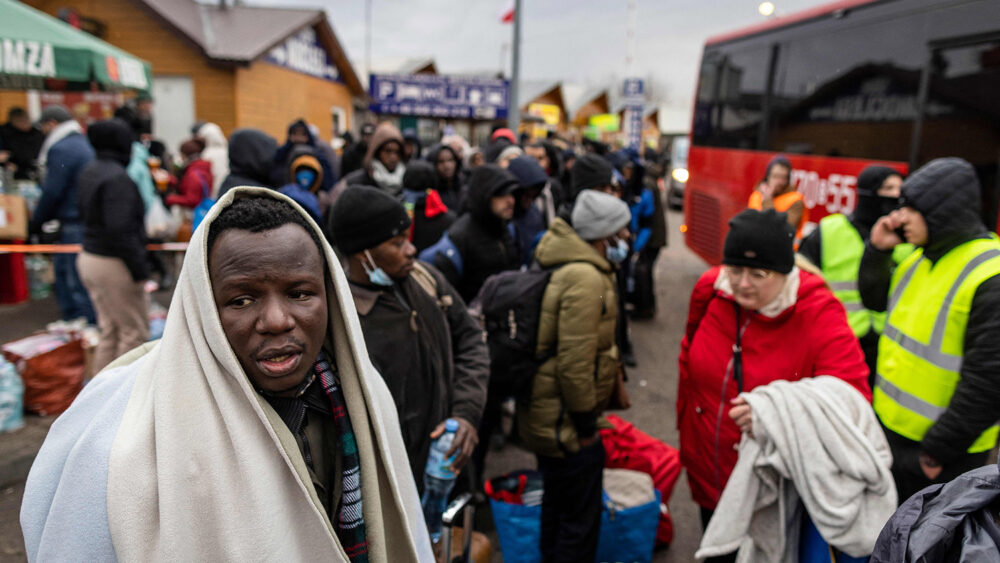 US Chair of the Young People’s Advisory Board

The devastating  attack Russia launched on Ukraine has prompted thousands of people to flee the country for safety. People around the world are watching on in shock and horror at the devastation and the reality of a war in 21st Century Europe. Millions are fleeing the country for safety, however there has been an overt racial hierarchy being implemented during evacuation efforts. The safety of non-African and Caribbean groups has been prioritised as African and Caribbean nations remain in limbo. In a time when the safety of  every human life is paramount, the lives of  Black students and workers are being deprioritised as they are forced by the military to remain within Ukraine’s borders. This war highlights the commitment by states to upholding Anti-Blackness as Ukraine experiences a humanitarian crisis. Especially when foreigners are supposed to be the first group of people evacuated in a situation like this. The politics of the situation has highlighted how borders remain places were visibly Black people face violence and discriminatory practices.

Following Russia’s initial invasion, African students living in Ukraine attempted to flee through the borders between Ukraine and Poland, however, they were prevented from escaping. There are some reports of ambiguity about whether Poland and Ukraine soldiers are stopping students at the border. However, a 26 year old medical student living in Ukraine interviewed by a reporter from Insider magazine shared that Ukrainian soldiers are stopping students from crossing the border. According to her account: “ Some people have gone to get buses, but they’re not allowing Black people basically onto the buses,” she said. “They’re prioritising Ukrainians. That’s what they say.” On another account, a Nigerian medical student shared that he and his friends were stopped from entering trains to flee Ukraine when soldiers pointed guns at them and forced them back: “When we asked why they were doing this, the soldiers pointed guns at us, endangering our lives.” Soldiers at the border prioritizing those that they view as Ukrainian citizens is an example of discriminatory treatment and militarised force through the lens of race and nationality.

Discriminatory immigration policies is an issue that has occurred in multiple Western countries against Black refugees seeking asylum. For instance, as a result of the economic and political crisis in Haiti after the Haitian President was assassinated in July of 2021,  thousands of Haitian refugees attempted to flee to the United States’ Texas border into the town Del Rio. The U.S. has deported nearly 14,000 Haitian migrants outside of the Texan border town over the last few months, and now many of them are trapped in Mexico. They are unable to work, have no access to medical care, and are targeted by those who wish to take advantage of them. On another note, in the United Kingdom Caribbean migrants who had been living in the country for decades were wrongly classified as illegal immigrants and were threatened with deportation during the 2018 Windrush Scandal. Some people were wrongfully deported while many others faced losing employment, housing, or loss of healthcare. Lastly, during the refugee crisis between 2014 and 2016 millions of Syrians and North Africans were faced against populist, anti-immigration, euroskeptic, and far-right beliefs across Europe. A recent example of how this has progressed is that the French government reduced the number of visas issued to people in North Africa to make sure migrants deported from France could not come back. The actions taken by multiple countries against migrants across the Black Diaspora reveal a recurring problem of Anti-Black sentiments stemming from immigration policies and sheds more light on how this behaviour is connected to Ukraine’s treatment of Black migrants.

This behaviour to the plight of African refugees can even be seen in the response of the European Union and the North Atlantic Treaty Organisation (NATO) have had toward the indifference to ongoing conflict in African nations. There has been widespread international media coverage on the events of Ukraine, but in contrast very little coverage on the civil wars that have endangered the lives of Cameroonians and Ethiopians. In Ethiopia, more than 2 million people have been forced from their homes and hundreds face starvation from the conflict. While Cameroon has been described as “Hell on Earth”  as the civil war between the separtist and government rages on. The lack of media attention and response to these two nations compared to Ukraine could be argued as international apathy toward the humanity of African nations. Human rights and refugee care are selectively applied by the international arena. Those a part of the Black Diaspora always receive the short end of political, economic and social support. This apathy extends to African citizens and foreign exchange students who are being mistreated in Ukraine, when there should be steps taken to ensure their safety.

The next step that needs to be taken is developing solutions of accountability while providing resources and support to Black migrants trapped in Ukraine. It’s disappointing to see the lack of humanitarian assistance from Ukraine. One thing that is being done now is to spread awareness about the inhuman treatment Black migrants are facing in Ukraine, while other refugees are being allowed to flee to safety. Whether it is through the news or social media, this information can help mobilise people into holding government leaders accountable, especially those involved in NATO, accountable to defend human rights equally among refugees. Additionally, Korrine Sky, an organiser who has been helping coordinate resources for Afro-Caribbean students fleeing Ukraine, shared a thread list with ways to help. Along with the resources Korrine provided, you can contribute to this GoFundme link to finance community members in Ukraine to pay for relocation fees, food, warm clothes, blankets, heating pads for those who are stranded in the country. Also, the GoFundme link has a list of a coalition of African and Black Organizations (The Mandela Legacy Foundation, Afro-culture, Noir Society, etc.) that could also use support from those willing to take action. If you are interested in taking action in some way or learning more about resources that could be used to support please email us at info@tbpi.com.